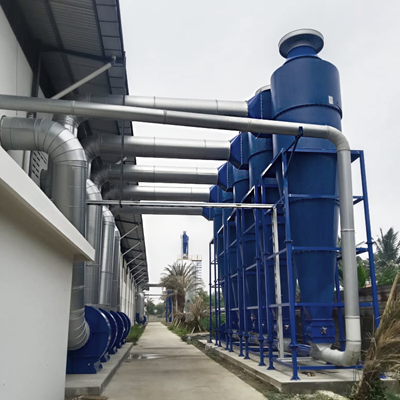 Since 1994, PT. Trimitra Mebelindo have manufactured wooden furniture at the highest quality. Their new 300,000 m3/h dust extraction system was recently designed and assembled by Blue-vent team in Jakarta, Indonesia. The system has 7 cyclones, 7 fans, two multiflow channels as well as Silo storage with 100m3 capacity. 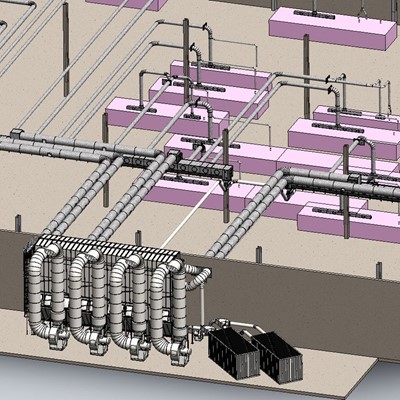 Sunon Furniture Group is Asia’s largest furniture manufacturer with more than 4,000 employees. Blue-vent has supplied several dust collectors to Sunon’s Chinese factories for more than a decade. Blue-vent USA has recently been contracted to supply a 140,000 CFM dust collector system to Sunon’s first factory in Mexico. The project will be commissioned in early 2023. 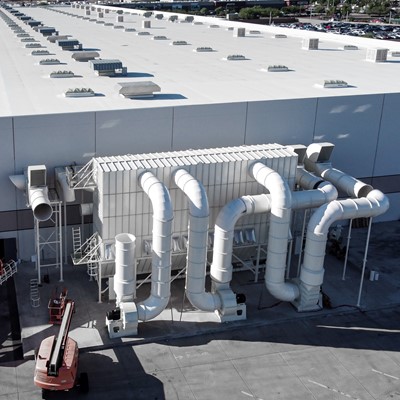 The installation of California Closets’ new 130,000CFM dust collector was postponed due to Covid-19. The completion time is now scheduled to October 2022. Due to scorching heat in Phoenix at this time of the year, Blue-vent’s installation team is doing most of the work throughout the night. 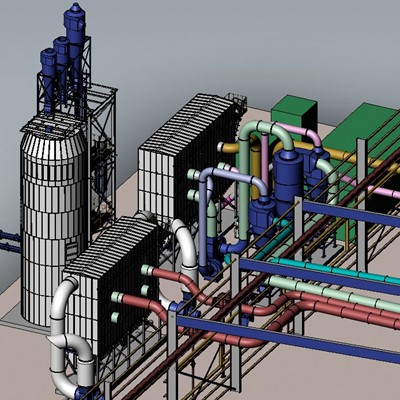 With two large sawmills, Timberlink is becoming the major supplier of structural and manufactured wood to the Australian market. Blue-vent partnered with Timberlink to supply a turn-key dust extraction system for their new CNC lines. The system is scheduled to be commission by second quarter of 2023. 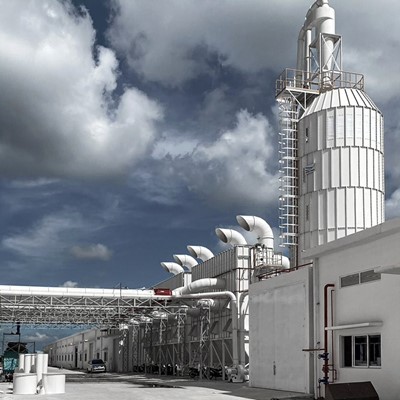 Kuka Home, a Shanghai listed company, is one of the world’s largest furniture manufacturers, represented in more than 120 countries. Blue-vent was invited to partner Kuka and has recently commissioned a 400,000m3/h state of the art dust collector system. 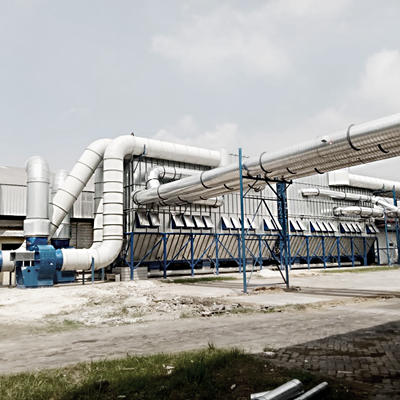 The Japanese owned PT Nankai specialize in production of decorative boards and moldings destined for the Japanese market. Blue-vent Indonesia has successfully installed and commissioned a 450,000m3/h dust collector system. The design of the system was challenging due to the huge amounts of waste material produced. 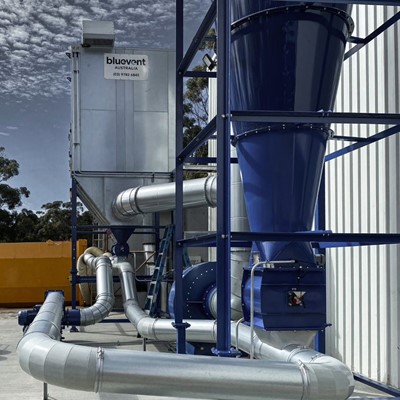 Blue-vent Australia has completed a series of dust collector installations in CMTP - one of Australia’s leading manufacturer of packaging materials. The systems are equipped with cyclone pre-separators to filter the massive amounts of waste material from their wooden pallet production. 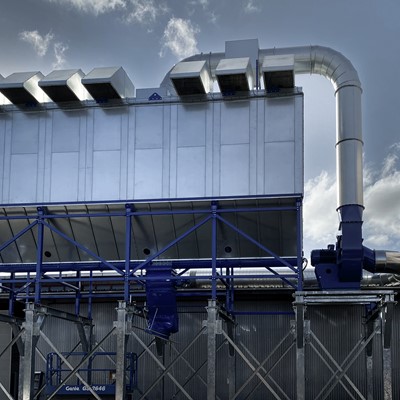 Hume Group is a family owned business and is today one of the largest manufacturers of door and building materials in Australia. Three years ago Hume turned to Blue-vent for solutions to solve their persistent dust collection problems. Blue-vent has since installed several dust collectors countrywide in Hume’s manufacturing facilities. End of last year Hume placed yet another order for a QV7 dust collector. The system is scheduled to be commissioned in February 2021. 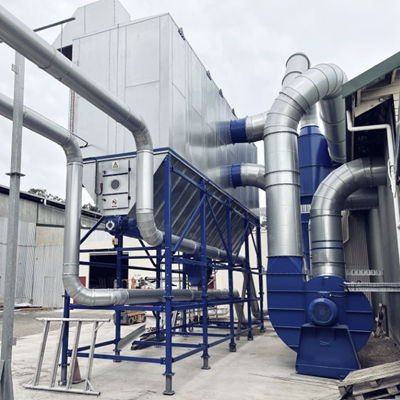 Millars Doors & Timber, a member of Hume Group, was once located in the Australian bush, but is now surrounded by the ever expanding suburbs of Western Sydney. The close proximity to residential estates demand for a well controlled material handling in order to prevent dust pollution. Millars last year engaged Blue-vent to propose a complete upgrade and replacement of their existing system. New QV dust collectors have now arrived and installation ready to commence. Millars and their neighbours are looking forward to the start of the new system. 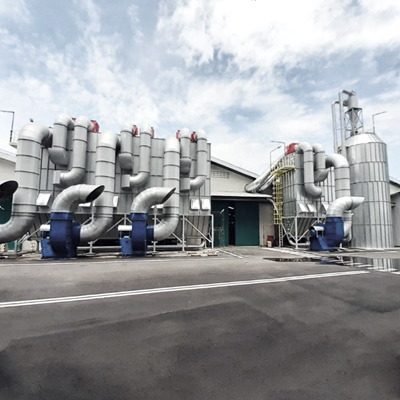 PT WII has placed order for large dust filter system Woodone, one of Japan’s largest manufacturers of interior furnitures and fittings are in the process of building up a new manufacturing plant in Indonesia. The plant is built in a joint venture with the Integra Group of Indonesia. Order has been placed with Blue-vent for five filter systems with a combined capacity of 550,000 cmh. 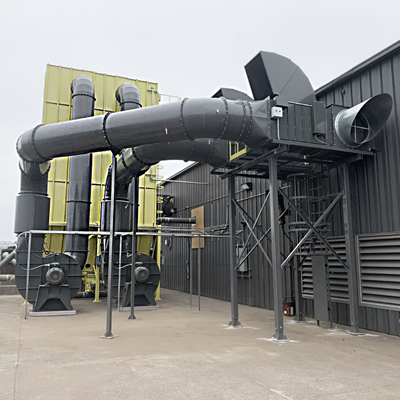 Epicurean has placed an order for a dust collector for their plant in Superior, WI. The system includes Blue-vent’s Multiflow channel, which will be only the second such installation in Wisconsin after Ashley Furniture (2014). 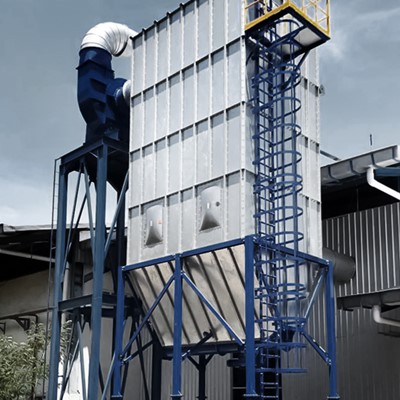 PT Wahana Lentara Paya (aka Activ Furniture) in Indonesia have placed an order for yet another dust collector from Blue-vent. This is Wahana’s third project with Blue-vent since the beginning of our partnership in 2008. 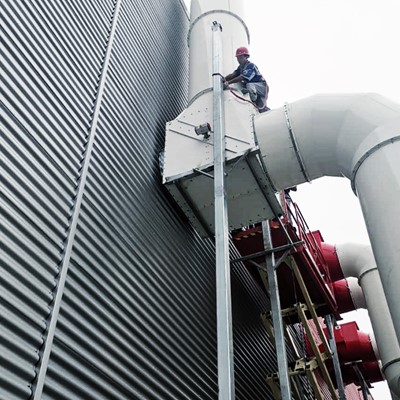 BGY Country Garden, listed on the stock exchange in Hong Kong and on Forbes 500 listed companies, have placed their first order with Blue-vent for at dust collector system with a combined capacity of almost 1.7 mil. cmh capacity. BGY is the largest builder of residential apartments in China. 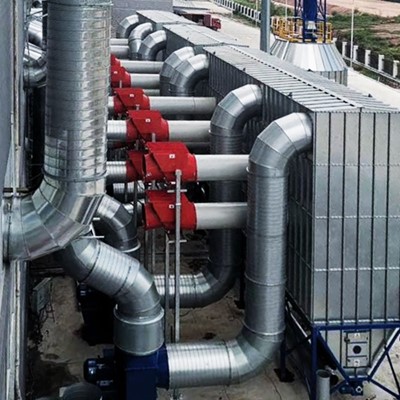 Yet another investment by Oppein

Yet another investment by Oppein. Oppein have placed an order for a massive dust collector system with a combined capacity of more than 1.3mil. cmh, bringing the total installed dust collector capacity from Blue-vent in excess of 13 mil. cmh. More than 80 large collectors delivered.

Atlanta, USA
Blue-vent participate for the 4th consecutive time in IWF underlining its strong presence in the market. Blue-vent’s booth will this year introduce a new series of FX collectors.

Jakarta, Indonesia
Explore and Experiment the Most Recent Innovations and Technology in Furniture Manufacturing and Woodworking Industry.

HCMC, Vietnam
Having established ourselves as the leading supplier for dust filter systems to the Vietnamese market, Blue-vent is extending the exhibition space this year in order to showcase our latest technology.

Guangzhou, China
Blue-vent will be taking part in the most influential trade fair for the furniture production, woodworking machinery and interior decor industry in Asia - Interzum Guangzhou 2023.

Hanover, Germany
As usual Blue-vent participate in Ligna. This time around we introduce several new products.

Las Vegas, Nevada, USA
Blue-vent and Aireworks Solutions are coming to Vegas - we will be showcasing our trustworthy dust collection technology at Association of Woodworking & Furnishings Suppliers fair.

Shanghai, China
The China International Furniture Fair in Shanghai is again a trusted place where Blue-vent will exhibit outdoor dust extraction systems for over 100,000 professional visitors.